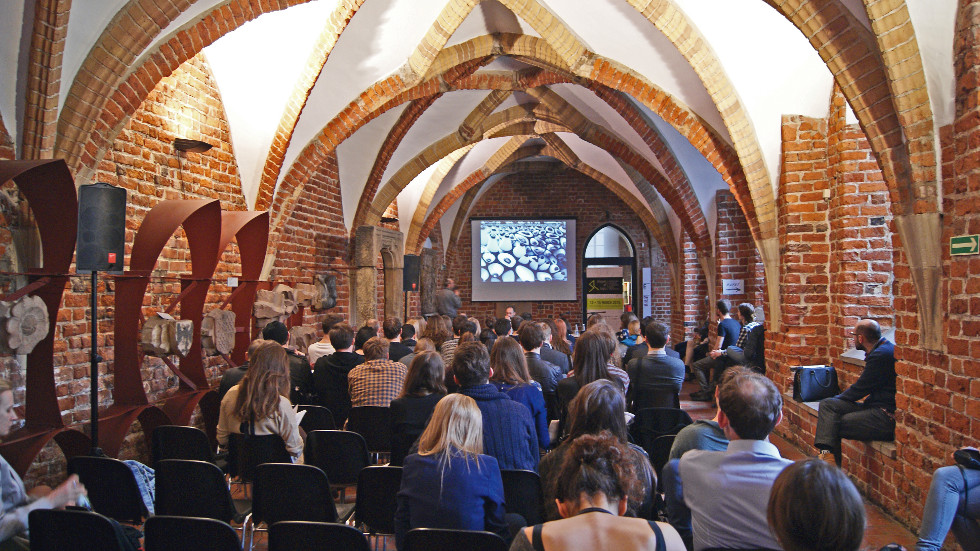 SHAPES OF LOGIC
Everything that surrounds us can be described

Conference Theme: Everything that surrounds us can be described
One may be tempted to write a thrilling rhymed poem picturing subjective observations. One may approach the subject by preparing a report consisting of simple words briefly describing visible objects and facts.
One may also use mathematics. Perceive the set of rules governing the world. Set the range and scale of parameters and algorithms – curvature of the terrain, inclination of the sun during a certain hour on a certain day at a certain latitude, the density of population, public satisfaction and happiness, and a turning radius of a truck.
Should all these aspects be taken into account during the design process? When architects ought to use complicated computational methods? When are the established norms satisfying? How acceptable are the mathematical experiments and are they defying the artistic spirit?
The technological developments reach architecture and change its form. We should respond to the above questions as it is a discipline requiring highest responsibility and its outcomes last for ages.

This research was about an interactive architecture within the patterns of the system in various games. The history of architecture, and movements such as modernism, brutalism, or post-modernism, showed that the type of the system might differentiated the quality and model of space. In games, there are several types such as classical board games, gambling games, digital games, professional sports, multiplayer games and many others. Each of them is based on specific system, rules, design (architecture) and interactivity. As in architecture, so in games the significant characteristic is the system which is a set of things describing the whole surrounding and interactions between human and built environment.

To answer the research question, how architects can design future places of interactive architecture principled on the traits of games, several game environments have been analysed, such as digital games (SimCity), board games (Game of Thrones, chess), ludic games (Hide and seek), and games with strongly environmental attributes as Maze. Moreover, the methodology of framing the system in games was implemented in analyses of realisations of Interactive Architecture. The results of research indicated that there was meaningful connection between the system in games, and in interactive architecture.

Challenges of parametric gis analysis in the redevelopment of illegal settlements in the south-european cities.
Since the cities in developing countries are constantly being forced to accommodate ever-growing number of migrating citizens, they struggle with the issue of illegal settlement as a result of authorities’ lack of spatial control . Projects challenging urban regeneration of these unrestricted areas face the difficulties of social resistance and issues of changeable constraints. Thus the design proposals require extreme flexibility, often reduced to basic principles that are difficult for further implementation for policymakers, developers and local stakeholders. In constantly changing and difficult to handle circumstances, the ability to reveal close to real-time mutable design proposals for urban redevelopment of mentioned sites seems crucial . This research paper examines potential applications of parametric tools devoted to spatial analysis, to help identify problems and hidden possibilities of those self-formed urban structures in relation to the city as a system. It focuses on spatial integration in terms of equable accessibility to attractor spots, and proper distribution of public space within. It also elaborates the accessibility to GIS data based on open source providers like USGS or OpenStreetMap as variables animating the outcome of the design process; and highlights the ease of interpretation of the analysis results in terms of enacting derived principles.